Recently I read an article that Apple was about to ditch Google Maps in its next version of IOS 6… Initially I thought this was a bizarre move as it’s such a fantastic tool for users and developers alike… But last night Apple’s move became a bit clearer when I jumped on my trusty iPhone to find a restaurant location in the city… Sure it did a great job of finding where I needed to go… but they also pinpointed the local Flight Centre (somewhat unrelated to food) and created a huge overlay which made it significantly harder to see where I actually wanted to go.

Personally I’m a fan of the Adsense program (mainly because they help monetise a few of my sites) but a lot of the ads they place into websites are actually related to the content. But this latest incarnation of the Google Advertising Monster has gone a little astray as it doesn’t provide any value to its users.

Google Maps has long been one of the most useful features of any smartphone device. Mapping features aside, Google Maps contains millions of business listings and can help you quickly pinpoint their location without having to type in an actual address. Hopefully they don’t start placing ads into their API as imagine your competitors popping up on your own website map.

It will be interesting to see what the new maps look like in OS6… but I doubt it’s going to have the level of data that Google currently has.

Update 1: Google has slashed the pricing for it’s use of the Google Maps API by 88%… Do you think this will help retain users/developers?

Update 2: Just upgraded my phone to IOS 6 Beta to try out the new maps. As suspected it lacks a signficant amount of business listings… perhaps this will come with the full release. Screenshots below. 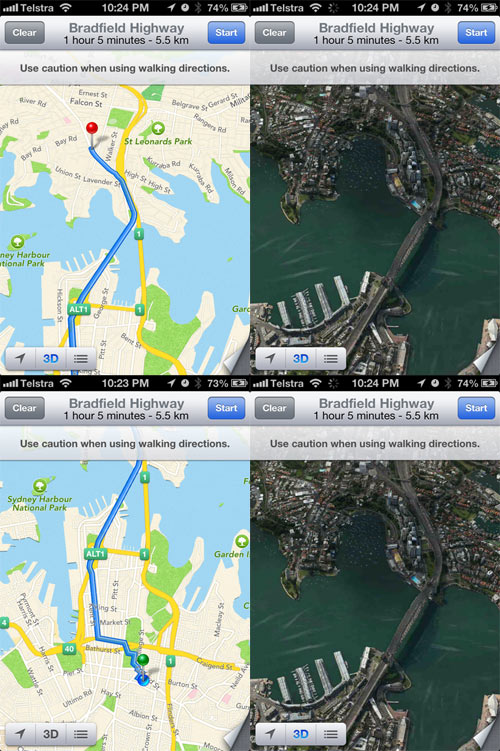 Michelle has been in marketing strategy for over 20 years. Michelle got involved in Engaging from Day 1 with the conviction of creating a business that ‘does great work with great people’, including clients, partners and staff. A born problem solver, she immerses herself in clients’ businesses and reconstructs their sales & marketing activities to ensure they operate to deliver directly on the business’ objectives. Michelle is passionate about maintaining a company and company culture that leaves the world a better place than we found it.