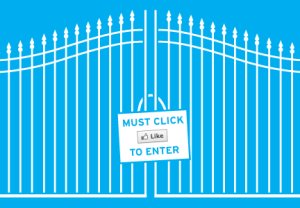 Have you ever stumbled across an online promotion / competition where you were forced to like their Facebook page before you could enter? This is a Like-Gate. You no doubt found it annoying… but you liked their page anyway so you could “win a free iPhone” or something along those lines.

From a marketer’s perspective, Facebook Like Gating initially seemed like a great way to grow your followers… but alas for all the wrong reasons… People who became your Facebook fans based on winning a prize unrelated to your business are most likely going to have ZERO interest in your products or services and are simply padding out your marketing KPI’s.

Another problem with Facebook Fan pages is that over the last few years Facebook has started to become a bit anti-social by cutting the visibility of your posts as they slowly try to push business to start using their pay-per-click advertising.

But the real issue comes when you combine this with thousands of unqualified Facebook fans who never interact with your posts (which further decreases the chances of people seeing your posts due to the EdgeRank algorithm) and you have successfully managed to destroy one of your most valuable marketing channels.

A while ago I setup a fan page for one of my competition aggregator sites. I then purchased 35,000 fans by running ads for certain competitions. I then proceeded to post one new competition per day. And here are the results: 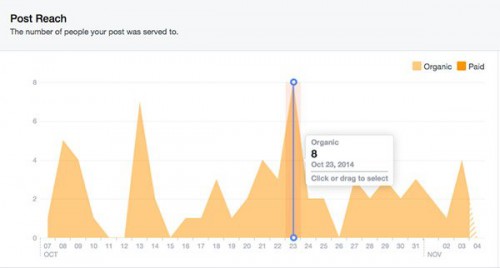 Out of the 35,000 people following the page the Post Reach per day peaked at 8 organic people per day! Yes that’s right only 8 out of 35,000 people actually viewed the post… and the worst part is… that was on a good day!

But it feels so gooood!

Sure it feels good to say we have 35,000 fans… But these numbers are nothing more than vanity stats and are more than likely watering down your real fans so they no longer see your posts.

I’ve read some reports of pages with 30,000+ fans simply deleting their pages and starting again. But if that sounds a bit too extreme you could try:

Once again quality over quantity is key here and like with all things, if it feels too good to be true it probably isn’t worth the effort.

Ralph has been developing websites and systems for nearly 20 years. Passionate and curious, he’s an a-typical developer who understands how users interact with the systems he builds. He understands that systems need to be human-friendly. Ralph loves working in an industry that is constantly changing and disrupting itself.