We as a whole, are more than a collection of the sum of our parts. We’re a bunch of uniquely cool nerds, all wonderfully different but who all share the same vision and values.

When you care passionately about not just the work you do but the people you do it with, then nothing is impossible, and we love doing the impossible.

We wanted to build a business where caring about each other, our clients and our work was at the core of everything we do. Our motto is doing good work with good people, and that’s only possible with genuine care embedded into everything we do.

Working in tech consulting with a fast growing CRM doesn’t come without its challenges. If you’re not fundamentally curious about how things work, what’s new, what’s changing and why, this space could be really stressful. Luckily we’re all massive geeks who love tech!

Collaboration isn’t just about working side by side with other people, it’s about creating an environment where everyone feels comfortable asking questions and talking to each other. The more collaborative we can be, the more everyone gets invested in what we do and doing it better. Everyone’s way more friendly too 🙂

When I started Engaging.io, I did it because I wanted to use technology and data to free my clients from the historical dependency they’d had on media agencies and tech partners. It was hard, and still is, but when we commit to something we follow it through and our clients can see this. It’s one of the reasons our referral rate is so high.

Our entire business is based on helping our clients better connect to their customers. We work with businesses all over the world, who in turn have customers all over the world. If we don’t employ a workforce representative of the world we live in, we could never hope to truly understand the most important thing in business – our customer’s customer. Plus it makes the food and parties so much more interesting!

We manage some of the most complex CRM integrations there are. If our clients ask us a question, we don’t have the luxury of saying we don’t know the answer. That means staying on top of every development, every trend and every event, and always being one step ahead of our client so they don’t ever need to slow down. It isn’t easy, and if I didn’t love what I do so much this could be stressful, but when you love this space, playing in it is pretty awesome.

A Great Place to Work 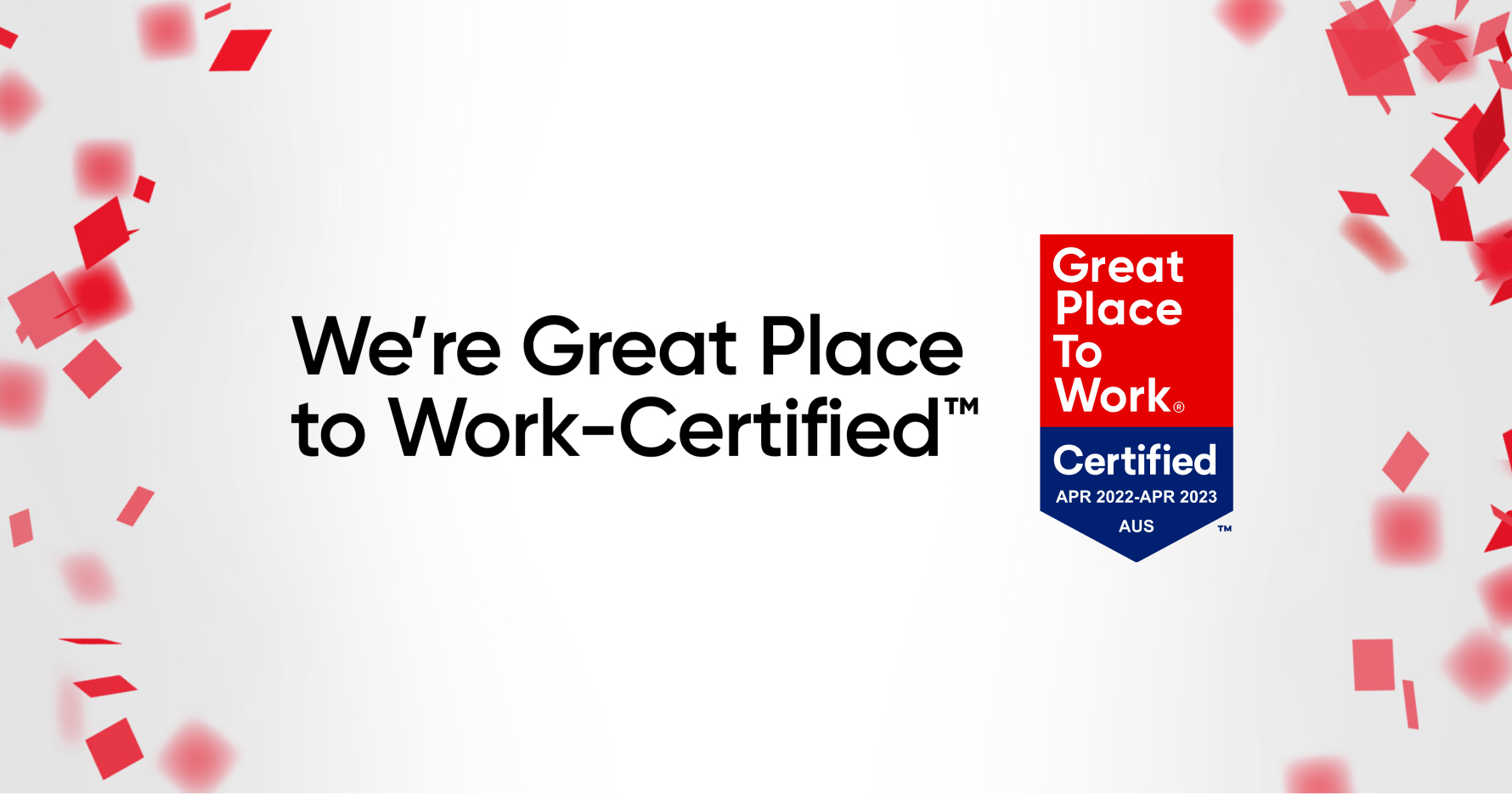 Getting GPTW certified was vindication for the founding director’s belief that you could build a business based on doing good work with good people, treating people well and STILL be successful.

We got a 98% staff satisfaction score, demonstrating our core values aren’t just something we pay lip service to, but how we live and breathe everything we do.

Being Great Place to Work certified is a great achievement, but ultimately it’s only recognition of the fact that our staff love working here because it really is a great place to work.

You can read more about our certification here.

I’d just moved out of home and completed an internship with a Social Media Marketing Agency, which was the original Career Path I thought I wanted. I realized quickly it wasn’t what I’d expected, and having had previous conversations with Michelle at Engaging.io, I got the chance to intern here. It wasn’t something I expected to fall in love with, but that’s exactly what happened.

It wasn’t easy, but I’m not sure any internship should be. I’d never used HubSpot, I’d never worked from home and I’d never worked in Tech Consulting, so the learning curve was huge, but the whole team supported me through every step of the process.

I really felt listened to and appreciated, and I was given the time and support to learn everything I needed.

The biggest surprise was I think the amount of trust and flexibility I was given. Being new to the work place I expected to have the sacrifice elements of my social and personal life, but I was given the freedom to fit them around work, and vice versa.

Being offered a permanent role with Engaging.io literally changed my life and I couldn’t be happier.

My advice to anyone considering an internship with any business, is just to throw yourself into it 100%. What you end up liking and doing may be a complete surprise to you.

I’d just moved out of home and completed an internship with a Social Media Marketing Agency, which was the original Career Path I thought I wanted. I realized quickly it wasn’t what I’d expected, and having had previous conversations...

When we started the business, our whole purpose and philosophy was to do ‘good work with good people’ and to prove you can have a successful business AND be nice to people. I never set out to be a female CEO, just a CEO, but in the tech space, it’s naive to think that being a female doesn’t make a difference when only 17% of CEOs are female. Ensuring more women are taking on roles in senior leadership positions is a particular passion of mine.

We started Engaging.io when I had two very little boys running around at home, so family first was how I needed to operate. We wanted to ensure that each employee also had the opportunity to put their family lives first, so we built up our internal processes and incentives around that philosophy. I wanted to be the kind of CEO that lived and breathed the values we created and instilled this into my team by leading by example. It’s also why we have one of the best flexible working and paternity policies in the world.

I have of course come up against sexism, misogyny and well, not particularly nice people along the way, but that’s the awesome thing about having your own business. We only work with people that we know we can help and who share our values. If you’re not a nice person, then you don’t get the privilege of partnering with us. So far I don’t regret a single decision when it comes to turning down work.

I do feel a responsibility as a female leader in a still mainly male dominated tech space to encourage and embrace diversity in all its forms, and am really proud of the eclectic team we’ve built across four countries.

I’ve been nominated for awards, interviewed by journalists, asked to judge on panels, and it’s always really flattering to get that recognition. But I hope my legacy will be to leave the world a better place than I found it, to encourage diversity and collaboration and to be aware of our responsibilities as humans to look after the world around us.

When we started the business, our whole purpose and philosophy was to do ‘good work with good people’ and to prove you can have a successful business AND be nice to people. I never set out to be a...

I worked for one of Engaging.io’s clients, and always got on well with Michelle and the team. When I was looking to leave I reached out to Michelle and was over the moon to be offered a role. Imagine my dread when only a few weeks into the role I found out I was pregnant. I was over the moon about the pregnancy, but terrified about telling my new CEO.

As it turned out I didn’t need to be. Michelle couldn’t have been happier for me, and despite not working for the qualifying period, I was still given full maternity pay.

When I came back from Mat leave, I dropped down to a 4 day week, and whilst it’s never easy working part time hours in a busy and demanding role, I do manage to make it work. I also get heaps of support and flexibility from the business, so when unexpected things pop up as they frequently do with a young baby, I never felt like I had to choose between work and my daughter.

It’s also amazing to know that if I have another child, not only do I get extended paid maternity leave, but also my full super contributions paid for a full 12 months.

I don’t really have anything to compare it to having only been a mum since working at Engaging.io, but it’s hard to imagine a culture that supports and embraces parenthood more. We even have a SLACK channel just for baby pictures!

I worked for one of Engaging.io’s clients, and always got on well with Michelle and the team. When I was looking to leave I reached out to Michelle and was over the moon to be offered a role. Imagine...

Despite working for a business based in Australia, I live and work in Auckland. I enjoy traveling and so when I get the opportunity to go with work to Australia or the USA then it’s always a bit of an adventure, but working in another country day-to-day has never caused me an issue at Engaging.io as the business is set up for people to collaborate effectively no matter where they are.

What was very cool this year was being able to take my first ever ‘workcation’. My wife is Brazilian and until working for Engaging.io it was always a toss up between short and rushed trips to South America and longer unpaid breaks from work. Engaging.io let me work from Brazil for 6 weeks, so we no longer had to compromise. The 16 hour time difference didn’t always make it easy, but my CEO worked with me to find ways to make it work. As a result, I got to see all my extended family and have an amazing time on the other side of the world, but didn’t have to lose all my annual leave to do it. It was so refreshing just to be trusted to get my work done.

It’s definitely something I’ll do again as it wasn’t just my life that was made easier, but my wife and my son’s. To be this is the epitome of flexible working at its best.

Despite working for a business based in Australia, I live and work in Auckland. I enjoy traveling and so when I get the opportunity to go with work to Australia or the USA then it’s always a bit of...